Two days before the Battle of the Brandywine, five thousand Hessian troops encamped on the hills north of Kennett Square, including land now occupied by the Union Hill Cemetery.

At the start of the Civil War, it is believed, the cemetery property was where Captain Frederick Taylor (brother of acclaimed writer Bayard Taylor) and his Union troops, the “Bucktails”, drilled before heading off to fight in the Civil War.

The Union Hill Cemetery Company was formed November 28, 1867. The first meeting was held December 9, 1867 at The Kennett Square Hotel.

Dr. Taylor was called as chair and John Gilmore was clerk. It was agreed that the company full should not exceed 20 members. A committee of three was appointed to solicit and report names at the next meeting to fill out the company.

This except from the original minutes: “Citizens of Kennett Square having met at the Kennett Hotel for the purpose of organizing a company for purchasing, holding and improving a lot of ground for a cemetery for the accommodation of the neighborhood. Having associated themselves as a Cemetery Company, declared the objects, articles and conditions under which they have been associated and desire to be incorporated.” 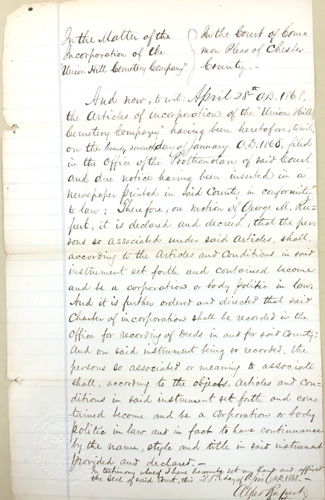 The committee was successful in recruiting another 12 men by December 16, 1867, when the Charter was prepared and adopted. It was signed by:

The Petition for Incorporation of the Union Hill Cemetery Company was submitted to the Chester County Court of Common Pleas on January 27, 1868. It was signed by all 20 members.

The Articles of Incorporation were signed by Prothonotary Alfred Rupert and filed April 28, 1868. The next day, a seventeen-acre plot of land was purchased in Kennett Township from Franklin & Lydia P. Reese. The northern line adjoined Bayard Taylor’s land in East Marlborough Township. The first interments were made in 1871, several being re-interments from other cemeteries.

The “Company” still has 20 members; many are descendants of original shareholders.